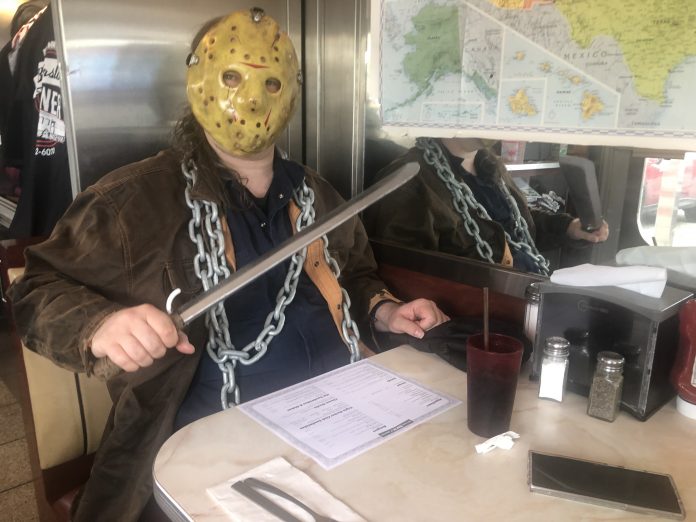 They had blood on their hands.

And also on their machetes, meat cleavers, hockey masks and assorted body parts. Hundreds of people marked the first relatively normal Friday the 13th since the pandemic in Blairstown. That is, if people strolling up and down Main Street dressed to kill could be described as “relatively normal.” But this day of triskaidekaphobia (extreme superstition of the number 13) was business as usual for the streets of Blairstown.

Slasher and horror movies fans from across the country and even across the pond made the pilgrimage to Blairstown to pay homage to the movie “Friday the 13th!” which in case anybody was wondering, was filmed in Blairstown and nearby Hope and Hardwick.

“I try to get here as often as I can,” said one apparent slasher in a bloody hockey mask who identified himself as only Jason V. (One of several, that day.) He said he and a fellow bloodletter drove down from Massachusetts to take in the multiple maniacs on Main.

Earlier in the day they visited Camp No-Be-Bo-Sco, a couple miles away in Hardwick. Ordinarily a tranquil camp for the Boy Scouts, No-Be-Bo-Sco reverts to its stage name, Camp Crystal Lake, on most Fridays of the 13th variety, and welcomes visitors to walk the grounds where, in 1980, the movie that started a genre was filmed.

The Massachusetts Jason & Co. were on their way to the Blairstown Diner, also made famous by the movie. To many Jason devotees the diner has become a shrine.

“We were ready for them this year,” said Blairstown Diner owner Gary Wishnia, who stayed open extra hours, offering specials such as the Slasher Burger. This year, the diner hosted the Friday the 13th Mini-Con, which included autograph sessions with several of the actors appearing in the movie series.

Along Main Street, more Friday the 13th cuisine could be had the Post Time Pub, which featured the Kevin Bacon Cheeseburger, named after the Hollywood star who had one of his first roles as a soon-to-be expired camp counselor.

Nearby, Village Sundaes came close to running out of several flavors of ice cream as the ghoulish crowd tried to cool off in the 85-degree day. “It was a great crowd,” said co-owner Lisa Kleber. “We had a lot of fun.”

Next door, the Friday the 13th Museum reported more than 100 visitors in just the first three hours, including several from the United Kingdom.

Historic theater Roy’s Hall on Main Street, which serves as the backdrop for some of the opening scenes of the film, offered several screenings of “Friday the 13th,” the first time in more than two pandemic-impacted years with slasher fans lined up down the street. Co-owner Stephanie Clifford said they were very happy to welcome them back.

“We were able fill up both showings,” Clifford said.

As Friday the 13th eased into Saturday the 14th, Blairstown resident Matt Keller, considered to be the dean of Jasons, and who has been inhabiting the role going back 15 years when the movie was little more than a footnote on Main Street, said he was pleased to see things return to that day’s version of normal.

“It’s just great and I love seeing people have such a good time,” Keller said. A bloody good time.