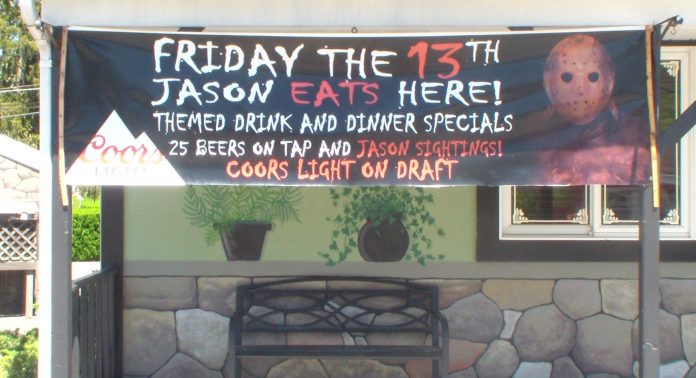 Blairstown is famously known as the place where ‘Jason’ from the 1980’s Slasher Movie, “Friday the 13th!”, terrorized people.

Every year, fans from far & wide descend on Blairstown to get a glimpse of movie scenes, resulting in many Jason characters roaming around town, complete with fake machettes splattered with fake blood.

Many of our local historic buildings were used in the movie scenes and some of our local Blairstown residents, as well.

One of the first scenes in the movie takes place in front of the historic Roy’s Hall movie theater. Owner, Mark Clifford proudly states, “Roy’s Hall has been showing the classic film “Friday the 13th!” for the past 12 years. It’s always a full house.” Roy’s Hall has two showings, at 7:00 PM and 9:00 PM.

There are many You Tube videos offering virtual tours of our community which showcase scenes in the movie. Our area has not changed much since the film was made.

The You Tube channel – https://www.youtube.com/watch?v=AcJYZl46NH0 shows Main Street in Blairstown, the village of Hope and of course, Camp Crystal Lake, which is actually the Boy Scout Camp, No-Be-Bos-Sco, in nearby Hardwick.

The Camp allows tours of the property several times a year, through Crystal Lake Tours and nearby residents have reported bumper to bumber traffic leading up to the remote property on Friday the 13th. For more information on a tour of “Camp Blood,” visit https://crystallaketours.com/upcoming/

The Gourmet Gallery, The Blairstown Inn and the Blairstown Diner offer special menus for “Friday the 13th!” Order a meal off the regular menus or the “Killer Classic Menus.” There are postcards, T-shirts and sweatshirts sold at various stores to commemorate the movie.

Blairstown Diner is hosting the first “Friday the 13th!“ Mini-Con Convention. Mini-Con is a two-day event on Friday the 13th and Saturday the 14th. Fans can experience the horror up close. Mini Con’s activities include Wedding Vow Renewal, a Costume Competition, and Celebrity autograph signing with a Meet & Greet.

Vendors for Mini-Con will be set up in the diner’s parking lot. Mini-Con enthusiasts enjoy a dinner followed by a movie screening. Nothing is more appetizing then watching teenagers being stabbed to death by a psychopath in the wilds of Appalachia.

The festivities will take place in the field behind the diner. Doors open at noon. General admission tickets can be purchased at the door or in advance at F13mimicon.eventbrite.com

Why is Friday the 13th so notorious?

The following listing is based on historical research, myth and lore.

This is an exciting ‘Ghoula Gala’ event that makes Blairstown a fun place to be and experience. This year, 2022, Friday the 13th only happens once, on May 13th. Next year it’ll happen twice, on January 13th and October 13th, 2023.

All are invited to scare away the bad luck of this day, enjoy the movie and support your local businesses. This year’s gathering will be like a spring celebration, so dig up a date and camp out if you dare!