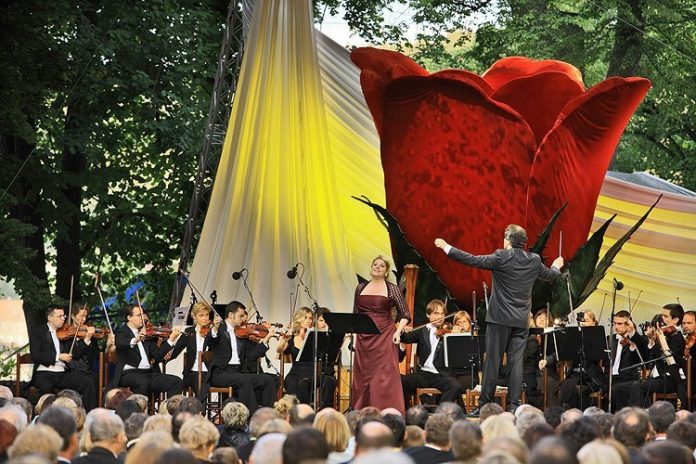 Bolshoi has been described as an Opera Diva.

A Diva is a female singer who is not, as sometimes described, temperamental and demanding. In this case, she is gracious and committed to the advancement of other singers. She shares her voice and techniques to create performances of a lifetime!  She is someone who can theatrically evoke beauty through song.

Alison Bolshoi has lived in Blairstown for the past four years. She is involved in the community, offering to help with the play at North Warren High School. Maybe you have sat on her lawn and watched a professional Opera or Cabaret concert during the Covid lockdown where she showcased Broadway singers to give them the chance to perform.

Bolshoi is a full-time opera singer and teacher of vocals. Performing arts and public speaking.

She has a studio in her home and in Manhattan and Glen Ridge. Some of her students come from as far as Philadelphia, traveling for hours to be trained. Bolshoi sings in many languages and her students learn how to sing Opera, Broadway style, Pop, or Cabaret.

Bolshoi hires professional pianists for her classes. Each student in group classes must practice in front the others, thus gaining self-confidence, plus the encouragement and energy from their peers as they work toward singing their songs at the seasonal concerts / recitals.

Bolshoi and two other Opera singers, soprano Amber Daniel and tenor Mathew Tartza, will be preforming a concert locally at Rutherford Hall, a historic landmark in Allamuchy. It will be held Saturday night, May 14th at 8pm. The concert is a fundraiser for a much-needed air conditioning system for the Mansion. The concert will showcase popular operatic pieces and featured duets.

Bolshoi’s Cabaret Troop will be performing at the Hall this June.

After seeing the grandeur of Rutherfurd Hall, available close by, the Bolshoi Studio is in discussions with the Rutherfurd Hall Foundation for holding a regular concert series there.

Bolshoi offers private lessons but prefers to teach a “Master Class” which is in a group setting. Her exercises include “Vocal Training” as a warmup routine for classical singing, expanding of the rib cage for greater volume of voice projection.


“When I ask someone if they like opera, 99% of the time most people say that they have never listened to an opera,” Bolshoi said. “Opera is not to be listened to; it is the full experience. They have the best costumes, the best sets, the musicians are classically trained masters. The opera is more artistic than any Broadway theatrical production.” Bolshoi exclaimed.

She takes a ‘Thespian’ approach of establishing a character and feeling the mood of the music. Theatrical training is a big part of the instruction. It can be likened to a martial art, connecting the physical body to the soul and psyche.

“Right now, I have Opera singers that will really make a splash in the Opera world” Bolshoi happily predicted.

Bolshoi refers to the singing voice as the Instrument. This term is widely used to define the voice of Opera singers. Bolshoi has a dramatic voice. She is a Contralto. This is a rare case of a deeper-sounding female singing voice that is highly regarded in the Opera world.

There are specific ways she teaches her students about how to achieve sound. Her teaching style is a culmination of singing professionally on stage and her years of study with renowned Opera singers.

Bolshoi’s reputation is well known. She has performed throughout Europe in many of the grandest Opera houses. She performed with the New England Symphonic Ensemble at Carnegie Hall where she dazzled the audience. She will be performing at the Dallas Opera in the role of Giovanna in Rigoletto this Fall.

Bolshoi has been preforming Richard Wagner’s compositions for 20 years. Wagner (1813-1883) was a German composer who wrote the music and the Libretto.  According to Wikipedia, an “Opera libretto refers to the “little book” or “book of a musical.” In addition to providing the structure of the performance, the libretto is important for containing the script and stage directions.

She comes from a theatrical family. Her grandmother had a beautiful voice and was always singing at church. Bolshoi mother was a well-known successful actress, singer and author. Bolshoi’s dad was a Broadway singer.

Naturally drawn to the Arts, she went to college to become an actress and singer and follow the family footprints. As a sophomore, she said she was happy, always playfully singing in the halls of the college campus.

A gruff professor heard her and called her into his classroom. “Who are you? What is your major?” he demanded to know. Bolshoi responded, “My name is Alison. I am Theater Arts major.”

“Nonsense, your voice is made for Opera,” the professor announced.

This professor took Bolshoi under his wing. He trained her when she was free from class. Bolshoi realized she could not ignore her voice. A lifelong friendship between the two has emerged. The professor mentored her and encouraged her to train hard and go for her new dream.

After graduation, Bolshoi set off for New York City to pursue an Opera career. She soon found herself singing Opera in a nightclub in the Village. She was discovered there and was soon performing throughout New York and New Jersey.

Bolshoi has studied with some of the best Opera singers. Each teacher taught Bolshoi their techniques of singing which she incorporates into her styles of teaching.

While touring in Europe she learned Wagner’s method for singing. She only knows one other teacher with this knowledge.

This method helps build stamina. “We are bigger than life! Singing, changing costumes, sometimes never stopping for hours. Operas can be very challenging; Wagner’s operas are six hours long. The performers must sing louder than the 110-piece orchestra. Opera singers are never miked. The story is sung and acted out. Sometimes you must perform when ill. The show must go on.” Alison exclaimed.

“I remember one night I was so ill. I could hardly stand. But when it was time to sing, I would belt out my songs and when I was done, I was in such bad shape… My colleagues and I could hardly believe where my performance was coming from. It came from my training using the Wagner method.” Bolshoi said.

She also teaches that when there is pain in the body, by breathing into the pain, the pain can be relieved.

Bolshoi’s teaching style pays off for her students. Her youngest, a girl of seven, played the lead role in the Lion King on Broadway for several consecutive years.

Andrew Merkle, a senior at North Warren, has been taught by Bolshoi since he was 14. Now 17, he’s learned how to control his voice and perform on stage exceptionally well, recently playing the lead role in the “Adams Family Values” school play at North Warren High School.

Bolshoi also trained Maya Watters for eight years. Bolshoi proudly recounted recently on Facebook how the hard-working young woman was offered a sizable scholarship to attend Eastman School of Music, one of the top five music conservatories in the country and one of the top 20 worldwide.

Bolshoi’s professional accomplishments are many. She has performed at The San Francisco Opera. Bolshoi sang with the first Symphony No. 2 by the famed Gustav Mahler (1860 – 1911) for The Plainfield Symphony of New Jersey. She has worked with the One World Symphony in New York and was the soprano soloist for the late composer, Alfredo Silipigni.

Bolshoi is a member of the Memorial Concert with the New Jersey State Opera. She has performed countless times in New York – showcasing her talent at the All-American Opera, at the La Mama Theatre and much more. For more info check her out at http://alisonbolshoi.com/bio

She and her husband, Sam, enjoy living on their sliver of paradise in Blairstown with their two children and several pets – surrounded by the rolling hills of Warren County. They met while working on a production of “The Marriage of Figaro”.  Her character ‘Suzanna’ marries his character Figaro’ in this classic Viennese Opera comedy by Mozart, circa 1786, and like an Opera, love literally blossomed on stage.

Bolshoi’s Facebook Profile says it all – “I’m a contralto, teacher of many, mother of two, lady of the manor, and wife of my dear Samuel.”