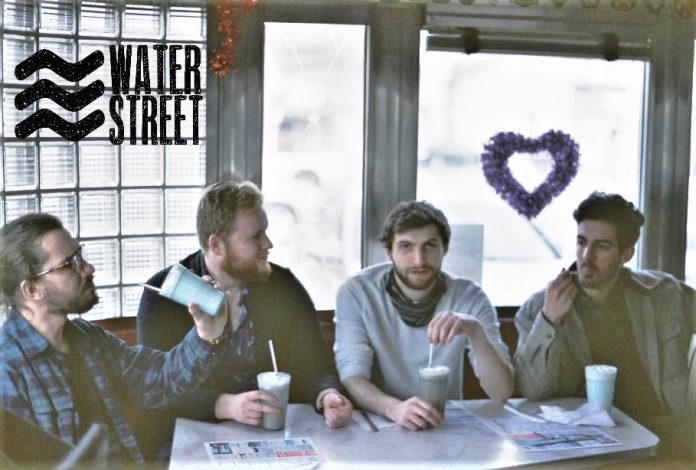 ARTISTS’ NEWS: Blairstown, NJ – Born out of the northwest hills of New Jersey in the shadow of the Appalachian Ridge, rising local band, Water Street hits the stage at Roy’s Hall on May 20th for their “All We Tried To Be” album release show. The band’s crafty combination of acoustic melodies, enticing mandolin riffs and a driving rhythm section with some hints of funk create a unique Pop/Americana sound consistently enjoyed by all audiences.

Formed in 2014, Water Street began playing in an old warehouse on the real-life street in Blairstown, where vocalist/guitarist Dave Paulson lived with his family. The band adopted the name Water Street as a nod to their roots and began playing out, starting at coffee houses and open mics, later moving to venues like The Bitter End, The Stone Pony, The Saint and a main stage at MusikFest.

After a three-year process of shut-downs, canceled recording sessions & gigs and disheartening production delays, determined band members and friends, Dave, Connor, Joe & Mike hunkered down in the old warehouse by the Paulinskill creek and completed “All We Tried To Be” – an 11-song album now available on all streaming platforms and which will be the focus of the May 20th performance at Roy’s. The show will also feature local young talent Andie Baldwin, currently headlining at Crystal Springs Resort: https://www.starfoxx.net/.

“All We Tried To Be” offers something for everyone – funk, rock, pop, Americana….even nostalgia, with haunting, at times snarky vocals and catchy lines you can’t help singing along to.

WRNJ radio host Greta Latona had this to say about the band’s latest release: “I am so happy you are out there with such great music. It’s fresh, different and explores every genre within the songs. Each song has its own character, and the thread between your music is the clever lyrics.”

Tickets for Water Street’s “All We Tried To Be” Album Release show on May 20th are available now at https://royshall.org/.