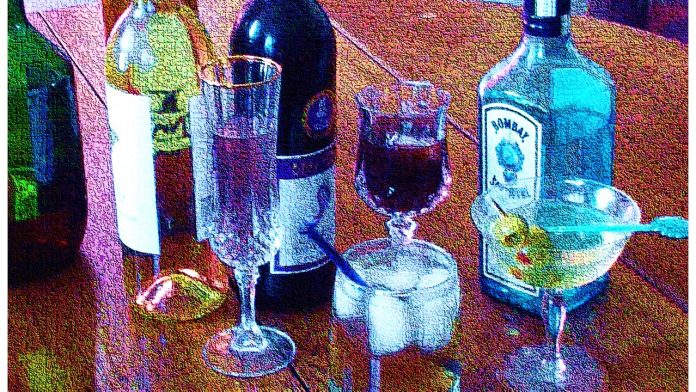 “Bootlegging & Prohibition at the Jersey Shore” – lecture by Greg Caggiano

The Warren County Library offers ZOOM lectures on a variety of subjects. Tuesday evening, March 1st, a lecture was given by Greg Caggiano to describe how Prohibition caused mayhem 100 years ago. He is an author and historian. For the past nine years, he has served on the Atlantic Highlands Historical Society.

His town’s history is steeped in rum-running during Prohibition. He said Atlantic Highlands was the hub of the illegal distribution of alcohol, not just for New Jersey, but for the entire East Coast. Caggiano gathers his research from his neighbors and newspaper archives

This historical time period was the end of the stringent Victorian Era. The ‘Roaring 20’s’ had begun. People started to loosen up. Women adopted the loose-fitting Flappers dress style and carried this new vogue proudly. Women smoked and drank. They went dancing unchaperoned. Men and women, black and white, could gather together enjoying themselves like never before.

Monmouth County was a convenient refuge from New York City. A short ride by ferry brought 10,000 people a day to the Shore.

Americans considered drinking a social pastime. Eighty percent of the population consumed alcohol. In New York City, there were bars and brothels every 10 feet. Immigrants looking for a better life fled the city for the Jersey Shore, finding work in the booming tourist industry.

The Temperance Movement began to counter a society that got out of control. Posters circulated with slogans illustrating that alcohol was the root of all evil. Preachers and women’s groups rallied for a sober lifestyle, stating slogans like; “Lips that touch liquor, shall not touch ours.”

J.D. Rockefeller stated, “I hope Prohibition will be wildly supported by the public opinion and soon the evil effects of alcohol will be recognized.”

In 1919, Prohibition was voted in and lasted from 1920 to 1932. It was not illegal to have alcohol in your home, however the transport and sale of alcohol was outlawed.

People began home brewing and bathtub gin was soon circulating. There were home-brewing accidents, though. Stills blew up and fires increased. There was loss of revenue as jobs associated with the alcohol industry went away.

On the other hand, “Sacramental Wine” for church was still allowed. Vineyards popped up in Holmdel and Marlboro where hundreds of gallons of wine was produced, supposedly to serve the church. Many people went to church just to get a little wine. Most of the wine was sold on the black market.

At first, some regular folks looking for fast money, decided to illegally produce and distribute alcohol to the public, hence the bathtub gin. These individuals were called bootleggers. Women became bootleggers simply because New Jersey had a loophole in the law whereby a wife could not be prosecuted if her husband ordered her to bootleg.

As the years progressed, organized crime, also known as the Mob. took over the market. Young men looking for opportunity, drove fast cars to evade the authorities. Small fast boats picked up cases of liquor and distributed it. Some town’s enforced Prohibition and some others, not so much.

The bar was replaced by the speakeasy. These underground establishments were hidden by the public. A password could be uttered to let the customers to get into the speakeasy. Revolving walls could swing the bar away from approaching police raids. Several minutes’ later coffee and tea was handed out so arrests could not be made.

The birth of the cocktail was created to disguise the taste of the poor quality liquor. Some alcohol was diluted with harmful ingredients like formaldehyde. Fruity juices and sodas were added to mask the harsh taste. “The Real McCoy” Rum refers to Captain Bill McCoy, an honest dealer who did not dilute his rum from the Caribbean and operated a floating liquor store three miles off New York City.

Crooked politicians and police had their hands in the pot. New Jersey was notorious for shootings in the streets as gangs terrorized the public. There was no speed limit at the time. Unskilled drivers trying to outrun the authorities recklessly killed civilians.

The movie” The Godfather” was based on the Vito Genovese crime family. Genovese rose to power as a young man. He coined “the vow of silence.” Informers would not get a rewarded, instead they were squealers and quickly murdered. Genovese notoriously corrupted his gang, such as; Lucky Luciano, Bugsy Seigel and Meyer Lansky who were just teenagers at the time.

Genovese was feared and loved by the locals. He was philanthropic toward the community and Church while also ruthlessly eliminating his opposition. As in the “The Godfather“ movie, Genovese called a meeting between all the gangs, a truce to stop the bloodshed and establish gang territories. The Jewish Mob controlled New Jersey and the Italian Mob, New York.

Politicians and police were paid off by the Mob. A Police chief would have the electric power station shut down every night between 10 and midnight so that in the darkness, marina boats unloaded the illegal cargo.

The Jersey Shore became the Wild West. Gangs killing each other in the streets. The whole country was outraged by the violence at the Jersey Shore. Citizens desperate for change blamed immigrants and alcohol for the unrest.

New Jersey had to crack down on the crime wave. This was front page news, 10 to 15 people a day were gunned down in the streets. Monmouth County Prosecutor John J. Quinn and his team of detectives started busting the crime families and the crooked politicians. Three years after Prohibition ended, Alcoholic Anonymous was created, helping people deal with addiction.

A quote from the book Prohibition on the Jersey Shore, “Well intended people felt Prohibition would bring a moral code to America, instead it created the very problem that they were trying to suppress or eliminate.” By the 1930s, it was clear that prohibition had become a public policy failure. New Jersey was one of the first states to repeal Prohibition.

A direct result of Prohibition was the rise in organized crime, illegal production and sale of alcohol, an increase in smuggling, and a decline in tax revenue.

One good result was that a new sport emerged. NASCAR Racing was created using the criminals’ fast getaway cars.

If interested in this subject, check out Atlantic Highlands Historical Society ….. ahhistory.org