Beloved Ash Trees Are Under Attack 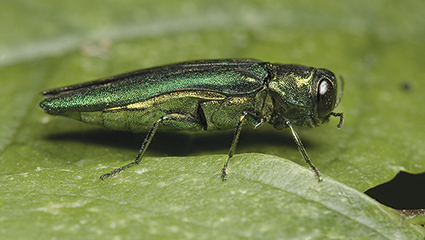 A Pest Alert bulletin on the Emerald Ash Borer (Agrilus panipennis), issued by www.emeraldashborer.nj.gov, and information found on USDA’s Animal & Plant Health Inspection Service (APHIS) websites, plus interviews with local forest firefighters offers the following overview on what’s causing so many ash trees to die and things you should know.

The emerald ash borer, or EAB, is an invasive insect from Asia that has been quickly marching, or munching, its way across America for two decades. From Detroit, where it is believed to have arrived, it has since spread at a rate of 1/2-mile per year coming to New Jersey in 2014.

Smaller than a penny, the EAB are metallic green beetles with copper abdomens under their wings that appear between May and June. They are strong fliers and have been known to ‘hitchhike’ on nursery and landscape trees. Unknowingly transporting infected firewood has also caused the EAB to spread far and wide.

EAB spend their larval stage living beneath the bark of all ash trees, except Mountain ash, and this is when the forest damage is clearly apparent. The feeding activity causes ‘girdling’ of the tree from within, wherein it is deprived of nutrients and dies usually standing upright in less than 4 years.

In New Jersey, 24% of forested land contains ash trees, with the greatest concentrations in the northern part of the State. The full, opposite-branched ash trees have long been valued as street and landscape trees yet over 99% of New Jersey ash trees will die. A popular landscape tree, the Chinese Fringe Tree has recently been found to also serve as host to the EAB.

Signs of EAB infestation begin with an abundance of woodpeckers tearing off pieces of bark, or flecking, as they dine on the white larvae, littering the ground below with bark scraps. The trees are left with bare patches of wood, causing a distinctive ‘blonding’ of ash trees in the forests and among street trees.

Another sign is that ash trees will form sprouts as the tree, which is being robbed of water from the insect invaders, tries to capture rainfall.

Small D-shaped exit holes are found on these trees, as the females leave to find new ash trees to lay their eggs. Beneath the bark can be found extensive insect galleries, or trails indicating their progression through the tree. Infestation usually starts at the very top of trees where the bare small twigs appear as ‘candlesticks’ in the forest canopy.

Brittle, standing dead trees are susceptible to wildfires and dangerous for firefighters and unsuspecting passersby underneath. Windblown ash trees falling on power lines have caused wildfires.

“Standing dead and dying trees no longer have moisture so they create new fires as embers from a 30ft. unstable tree spew over the fire line,” said Bob Wolff, retired Section Forest Firefighter who on high fire danger days is stationed by the State Forest Fire Service in the Catfish Firetower off the Appalachian Trail in Hardwick.

He further described the dangers posed by dead and dying ash trees as, “Anytime a wildland firefighter or a forester is in the woods, these falling trees and limbs cause the need to wear hardhats. Now that the weather is getting warmer, the hazard may extend to the landowner as well.”

What can landowners do?

The Pest Alert bulletin suggests that landowners plan for the inevitable EAB infestations if they have ash trees. It begins with reporting EAB sightings and/or resulting tree damage to the following agencies:

Then, identify not only the size, quality and location of the species but also assess your tolerance for risk. Plans should be made to cut down potentially hazardous ash trees over homes, walkways, play equipment, parking areas and spots for outdoor activities.

Consultant foresters and Certified Tree Experts can help identify if the tree is healthy to begin with and worth the cost of annual treatment. They can also help get the most value from salvaging logs from the property.

Some private arborists are offering soil and trunk injections, as well as bark and canopy spraying. DIY products are sold; however, it is advised to call your local Cooperative Extension office regarding long-term pesticide use.

Having spread to more than 35 states, all websites discussing how to combat what USDA has deemed “the most invasive forest insect ever to have invaded North America,” echo the same cautionary tip – Do not to transport firewood to and from other locales, as it may be infected.

What can municipalities do?

Township and County budgets are advised to proactively adopt the following necessary activities: